Yesterday marked the anniversary of my departure for London, England. 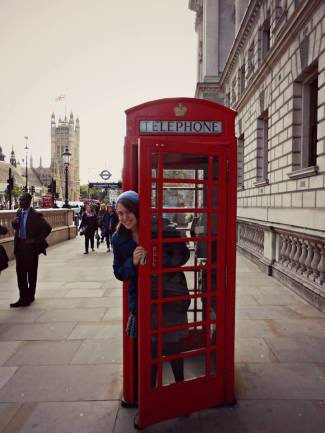 I can’t believe it’s been a year already.  It feels like yesterday that I stepped on that airplane.

The thing about adventures is that they change people.  It happens in books all the time.  In The Hobbit, Bilbo returned to the Shire a very different person who left.  No matter what he did, or how much time passed, he could not go back to the simple life he had before.

My adventure changed me.  I became aware of how much I can accomplish; confident in my ability to follow through; and incredibly independent.  I learned to see the world beyond my limited American perspective.  I learned to be globally minded, and gained a deep appreciation for people and cultures apart from my own.  I got to see amazing things–the Alps, Stonehenge, the Eiffel Tower, the Cliffs of Moher, the Scottish Highlands, to name a few.  I met wonderful friends that are still dear to my heart, people who understand parts of me that no one else can.  I experienced how dark this world is, but also gained appreciation for the light that does exist.

Like Bilbo, I returned home a different person.  And adjusting back into normal life was a challenge.  People who had been dear friends no longer knew how to relate to me, and I to them.  I tried, for a while, to make up for ground that I had lost while away, but eventually gave up.  Connections were lost, and I decided to move on.

Being an English major, my three and a half months abroad changed the way I read.  In my Victorian Literature class, not a day passes when my experiences fail to enhance my experience.  Just today, someone put a map of the city up while discussing a historical detail and my heart gave a tinge because I know those streets.

The other thing about adventure is that once you have a taste, it never lets go.  You’re hooked for life.  Already, I feel the desire to see lands unknown rising up in me.  I long for city streets to explore, train rides through countries that are new, and conversations with people from far away places.

Thank goodness I’ve only got one year of school left.  Because adventure is out there, and I am going to chase it.  Who knows where I’ll be a year from now?