If we were having coffee, we would most likely be in a car cruising down the interstate clutching cardboard Starbucks to-go cups.  I’d be tired and not super coherent–not that it matters due to the fact that the music would be blasting.  (Why I’m in this state will become clear later in the post.)

It’s been a busy week.  Well, the first of what will be many busy weeks.  When I’m not working my day job, I’m helping out at my family’s apple orchard.  We’re on the verge of peak apple season, which means that crowds are coming and no one in the house gets any rest.  I don’t have a single day off in the next month.  I’ve managed to squeeze in fun activities with friends here and there, which doesn’t do much for my overall energy levels, but completely worth it.

If we were having coffee, you would know that I went to the Minnesota Renaissance Festival last weekend with a friend.  We got there early afternoon, just in time to watch jousting.  Most of the day was spent wandering the festival people-watching and admiring costumes.  (I would totally dress up, but it’s not my friend’s thing.)  At the end of the day, my friend and I agreed that the best part of the day was the free Woodchuck’s Hard Cider tasting–which we enjoyed so much that we went again later in the afternoon. I’m currently listening to A Feast For Crows by George R.R. Martin on audio book, so the era is fresh in my mind.  A large part of me felt like I had walked straight into a book and I was sad to leave at the end of the day.

If we were having coffee, I’d tell you that I had the chance to see two of my favorite bands from high school last night.  Relient K and Switchfoot are currently touring together and when a friend offered me her spare ticket, I jumped at the opportunity.  Both bands released fantastic new albums this summer and I’ve been listening to them on repeat over the past week to prepare.

Getting to the show was a bit rough–I worked until six and then had to drive an hour and a half into the cities to the venue.  The show started at seven, but even though I got there half an hour late, it hadn’t started yet.  The venue was small enough that everywhere has a good view.  My friend had gotten standing spots right in front near the stage, so I had to push myself through the tight crowd to get there (which was absolute hell for an introvert like me, but totally worth it.)  “They knew you were coming late and waited for you,” my friend told me.  I’m so glad they did!

When the bands took the stage, I was immediately transported back to my middle school/high school years.  I’ll refrain from raving too much, but each band put on fantastic performances.  I’ve seen Relient K before, but it was my first time seeing Switchfoot live.  I’ve wanted to see them for a long time and they didn’t disappoint!  I was blown away at how genuine Jon Foreman (the lead singer) was–you could easily see it wasn’t just a performance or a job, but the chance to meet and interact with people.  He walked among the crowd a few times (I was ten feet from him at one point!) and it was evident that he genuinely cared about every person–which is rare in a performer.  All in all, both bands were phenomenal and I would pay to see them again in a heartbeat. 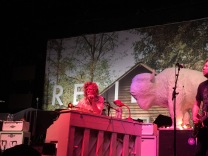 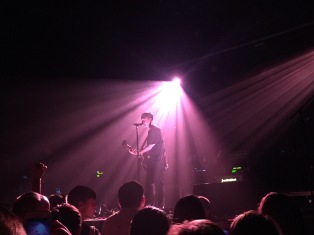 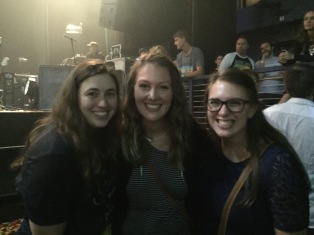 It was fun to see high school friends again

I ran into several friends from high school at the concert as well!  I happened to be standing within an arms distance of one, so I said hello between sets.  I knew the other would be there, so she joined us in front for Switchfoot’s set.  There’s nothing like former  boy bands that have now evolved into rock bands to bring people together.

After the show, I slept on a friend’s couch in the cities.  I had to be at work at 8:30 AM, so I got up at six, rolled out of my sleeping bag, and into my car.  As a result I am tired and relatively incoherent–although I was able to fool my library patrons by pretending to be a functioning human being.  (The mocha I downed on my way here helped.)

If we were having coffee, I would now pass things over to you.  How is your week?  Anything interesting/boring/new/routine/exciting happen?  I’d love to hear about it!